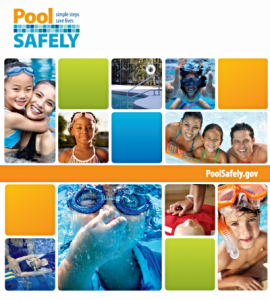 WASHINGTON, D.C. – New statistics released today by the U.S. Consumer Product Safety Commission (CPSC) show that fatal and non-fatal child drownings in pools and spas continue to pose a public health and safety challenge across the United States.  CPSC Chairman Elliot F. Kaye and Rep. Debbie Wasserman Schultz urged families and communities at a news conference to take simple steps ahead of the start of the summer swim season to prevent child drownings.

At a press conference on Capitol Hill today, Chairman Kaye announced the start of the application period for the Pool Safely Grant Program, an opportunity for state and local governments to apply for monies to support education and enforcement programs.

“With Memorial Day weekend marking the traditional opening of pools in many communities, we urge parents to remember a simple message: If you prevent unattended pool and spa access, you prevent many children from drowning,” said Chairman Kaye.  “As a parent of two young children myself, I have mixed feelings about heading into the summer months.  It is an exciting time with so many pools opening, but it is also a distressing time, as drowning continues to be the leading cause of unintentional death for children ages  1 to 4.  The most effective drowning prevention strategy is to cut off the access by completely surrounding pools and spas with fences that isolate the water from the house.”

“A day at the pool should be a fun family activity, and safe. Today’s statistics show that we still have a lot of work to do and are still losing too many of our children to preventable tragedies involving pools. As a mother of three, this issue is close to my heart.  I hope all parents take time before summer begins to learn about common hazards, have a conversation with their kids, and take the appropriate measures to keep them safe around the pool,” Rep. Wasserman Schultz said.

Founder of CPR PartyTM (formerly The C.L.A.Y. Foundation), Laura Metro, whose son Clay suffered a 2011 non-fatal drowning at a community swimming pool, stressed the importance of this commitment. “Following the simple water safety steps outlined in the Pledge may truly save a child’s life,” said Metro. “Because a friend at the scene of my son’s drowning started CPR, one of the key commitments in the Pledge, Clay is still with us today.”

After its successful launch last summer, CPSC is again urging adults and kids to reaffirm their commitment to staying safer this swim season by taking the Pool Safely Pledge. So far, more than 11,000 adults and children have taken the Pledge to pool safely.

“I encourage all parents and kids to join the Pool Safely family and take the Pledge,” said Kaye. “If we are going to stop drowning and keep kids safer in the water, it will take a commitment from every community in our country.”

Memorial Day weekend represents the traditional start of the summer swim season. This summer the Pool Safely campaign is again focusing on populations most at risk of drowning:

Follow these simple steps to keep children safer in and around the water:

Pool Safely, a national public education campaign supporting the requirements of Section 1407 of the Virginia Graeme Baker Pool and Spa Safety Act, works with partners around the country to reduce child drownings, non-fatal drownings and entrapment incidents in swimming pools and spas. Parents, caregivers, and the media are encouraged to visit: PoolSafely.gov or @PoolSafely on Twitter for vital safety information regarding the prevention of child drownings in and around pools and spas.

The U.S. Consumer Product Safety Commission is charged with protecting the public from unreasonable risks of injury or death associated with the use of thousands of types of consumer products under the agency’s jurisdiction. Deaths, injuries, and property damage from consumer product incidents cost the nation more than $1 trillion annually.

Your email address will not be published. Required fields are marked *